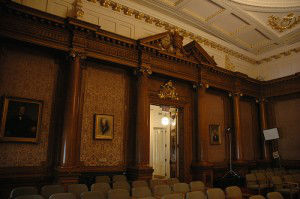 According to a recent decision, a New Jersey courtroom can be deemed defective on constitutional grounds. The courtroom in question, located in Warren County, came under scrutiny after a criminal defendant argued that its layout obstructed his view of the witness box and thus violated the Confrontation Clause of the Sixth Amendment.

Superior Court Judge Ann Bartlett ultimately granted Deputy Public Defender John McGuigan’s motion to move the criminal trial to another venue, finding the courtroom to be “constitutionally defective.” According to the New Jersey Law Journal, Bartlett herself sat at the defense table and instructed the defendant to sit in the jury box, while McGuigan took the jury stand. Bartlett not only agreed that the defendant’s view was obstructed, but also identified a host of other problems with the recently renovated courtroom.

Bartlett raised concerns about the layout of the jury box, prosecutor’s table, and gallery. She specifically noted that it could prevent a defense lawyer from walking in front of some jurors during an opening or closing statement and force him to stand far away from his client while addressing the witness (possibly suggesting to the jury that the defendant was violent). She also pointed out that sidebar discussions could likely be overheard in the gallery.

Ultimately, Bartlett concluded that while the courtroom “looks lovely,” it was “poorly conceived from a trial standpoint” because “the judges were not consulted when this courtroom was designed, the judges who sit here, and the defense bar was not consulted in the final stages of the design.”

The ruling is problematic for prosecutors because it calls into questions prior convictions secured in the courtroom and another with the same design. Prosecutors plan to file an appeal with the Appellate Division or the Supreme Court and hope to resolve the matter quickly. In the meantime, Courtroom Two is closed for criminal business.