A federal judge recently ruled that the Bernards Township Planning Board wrongfully denied the Islamic Society of Basking Ridge’s (ISBR) plan to build a mosque. The court specifically found that the Planning Board discriminatorily applied the township’s parking ordinance by requiring the proposed mosque to have more parking spots than a comparably sized church or synagogue. 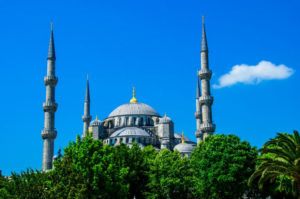 ISBR filed suit to challenge the Planning Board’s denial of their application to build a mosque in the township. On April 20, 2012, ISBR applied for preliminary and final site plan approval, proposing the construction of a 4,252 square foot mosque. The site plan proposed a building consisting of “a 1594 –square foot prayer hall, a wadu room, a multipurpose room, an entry gallery, a kitchen and an administrative office.” The site plan provided for 50 parking spaces in light of the prayer hall’s estimated occupancy of 150 people.

For the duration of ISBR’s pending application, ISBR faced widespread community opposition. The approval process was also extraordinarily lengthy, commencing on August 7, 2012 until the application was denied on December 8, 2015 – amounting to 39 hearings over a three-and-a-half year period, which is more than the Planning Board held for any previous applicant.

One of the main issues raised by the Planning Board was off-street parking. The Bernards Township Parking Ordinance sets forth a 3:1 ratio, between seats and parking spaces, as an acceptable standard for “churches.”  Prior to ISBR’s application, the Planning Board applied the Parking Ordinance’s 3:1 parking ratio for “churches” to every house of worship that applied for site plan approval, including two local synagogues.  The word “churches” is not expressly defined in the Benards Township Parking Ordinance.  Moreover the Ordinance states that words that are not expressly defined have the definitions as set forth in Webster’s Third New International Dictionary of the English Language.

The Parking Ordinance further provides that the Planning Board may require additional “documentation and testimony” and, “[b]ased upon such documentation and testimony, . . . require that provision be made for the construction of spaces in excess of those required [by the ratios set forth in the ordinance], to ensure that the parking demand will be accommodated by off-street spaces.” In reliance on the above provision, the Planning Board required ISBR to provide 107 parking spaces rather than the 50 required by the 3:1 ratio, despite the fact that ISBR’s congregation currently peaked at sixty-five worshippers for one weekly service.

The Planning Board also rejected ISBR’s proposal to split the largest weekly service into two services to alleviate parking concerns. Ultimately, ISBR revised its site plan to provide for 107 parking spaces, although it did not formally create a final site plan including this revision. The Board, nevertheless, denied ISBR’s application on January 19, 2016.

ISBR challenged the Planning Board’s decision on two bases. It argued that the Planning Board’s disparate application of the off-street parking requirement between Christian churches and Muslim mosques violated the Religious Land Use and Institutionalized Persons Act (RLUIPA); and that the parking ordinance was unconstitutionally vague under the Federal and New Jersey Constitutions.

U.S. District Court Judge Michael Shipp sided with ISBR on both issues, ruling that it was entitled to Partial judgement on the pleadings.

The court first concluded that the township violated RLUIPA’s nondiscrimination provision, noting that the Planning Board applied its “own unsubstantiated interpretation that the term ‘churches’ exclusively refers to Christian churches and not Muslim mosques.” Judge Shipp added, “Defendants’ interpretation of the Parking Ordinance’s text plainly distinguishes between houses of worship based on religious affiliation. Accordingly, Defendants’ application of the Parking Ordinance violates RLUIPA’s Nondiscrimination Provision, which strictly prohibits express discrimination on the basis of religion.”

Because RLUIPA’s nondiscrimination provision applies strict liability toward laws and the application of laws that lack neutrality and general applicability with regard to religion, the court did not consider the Township’s attempt to justify their conduct as necessary to further the Township’s interest in regulating local traffic and parking.

The court also found that provisions within the Parking Ordinance grant the Planning Board impermissible discretion as applied to religious institutions. “Specifically, the Parking Ordinance allows the Board to require additional parking spaces without having to abide by any specific guidelines as to what constitutes sufficient off-street parking. The Court, therefore, finds the challenged provisions unconstitutionally vague under the United States and New Jersey Constitutions, as applied to ‘churches,’” Judge Shipp explained.

The Township has stated that it is currently exploring its options for appeal. In addition to ISBR’s suit, the Department of Justice filed its own lawsuit against the Township in November. We will be closely tracking both cases and will provide updates as they become available.

For more information about the Third Circuit’s decision in Islamic Society of Basking Ridge v. Township of Bernards or the legal issues involved, we encourage you to contact a member of Scarinci Hollenbeck’s Government Law Group.