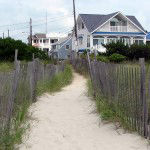 Many homeowners faced with damage from Superstorm Sandy may have another obstacle to rebuilding – the Municipal Land Use Law.  In a recent decision, the Appellate Division held that a home in Seaside Park lost its ‘grandfathered’ non-conforming use and structure status when it was gutted for repairs.

Motley v. Borough of Seaside Park, Docket No. A-3214-11T4, (March 4, 2013), involved a two-structure lot located in a zone restricted to single-family uses. It was deemed a pre-existing non-conforming use, as the structures were erected in 1931 prior to the relevant zoning laws. The property and structures in question were also non-conforming because they failed to conform to the zoning ordinance’s bulk requirements with respect to lot width, lot depth, lot area, front yard setback, rear yard setback, side yard setback, and building coverage.

The plaintiff property owner decided in 2007 to renovate the front house after pipes in its hot water system burst and caused significant damage. He also sought to add a complete second story (to replace a loft area), but his application to expand the non-conforming use for these purposes was denied.

As the repair work on the house progressed (because that did not require variances or other board approval), it became clear that there was more damage to the structure than was initially known. Eventually, the borough’s building inspector determined that the entire structure needed to be removed. However, after discovering the extent to which plaintiff had demolished the front building, the code enforcement officer issued a stop work order. He determined that too much of the building had been removed, to an extent that the project had become, in essence, “all new construction,” beyond the scope of the construction permits issued for the project.  Motley appealed to the Zoning Board of Adjustment. The Board refused to lift the stop work order.  Motley filed an action seeking an order overturning the decision.

The court’s decision largely relied on N.J.S.A. 40:55D-68, which allows a non-conforming structure to be rebuilt only in the event of “partial” destruction.  In contrast, the court noted that existing precedent holds that the total destruction of such a structure, “whether by the owner’s design or by accident,” terminates a non-conforming use and the owner’s right to continue that use likewise ceases.

In this case, the court found that by removing every part of the structure except the foundation and the footings, the plaintiff effected a “total destruction” of the building, noting that the condition of the home “exceeds any reasonable notion of a mere partial demolition.” Although the destruction in this case involved intentional demolition by the property owner, the court relied on the statute and case law to find no difference in result if the destruction had been caused by a fire, flood or other natural disaster.

The decision will clearly be important as New Jersey municipalities begin to evaluate applications for permits involving pre-existing non-conforming uses or structures damaged in Superstorm Sandy. The court recognized that this decision and the statute on which it is based may lead to “harsh outcomes for owners of non-conforming structures who innocently come to learn that their buildings must be demolished.”  However, the court said it was bound by the statute and left such policy concerns to be addressed by a “legislative response.”  Options in that regard may include an amendment to the Municipal Land Use Law or amendments to local ordinances to legalize prior non-conforming uses or structures, although the specifics of which existing conditions to legalize by ordinance may prove challenging.

For more information about this case or the legal issues involved, we encourage you to contact William C. Sullivan, Jr. or any member of Scarinci Hollenbeck’s Public Law Group.