The Appellate Division of the New Jersey Superior Court recently held that banning digital billboards, while allowing static ones, does not violate the U.S. Constitution. The trial court had previously held that the Franklin Township ordinance violated the First Amendment. 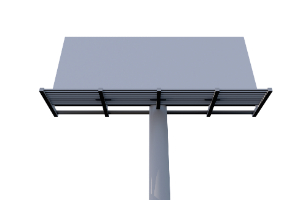 While conditionally permitting static billboards in the M-2 industrial zone, the ordinance prohibited digital/electronic billboards such as the one plaintiff sought to erect. After the Board of Adjustment of the Township denied the application seeking a variance, E&J Equities filed an appeal challenging the constitutionality of the ordinance. The plaintiff maintained that the billboard ordinance violated E&J’s First Amendment rights through its unjustified limitation on commercial and non-commercial speech. As detailed in a prior post, the trial court agreed that the ordinance impermissibly curtailed commercial speech and, thus, violated the First Amendment to the U.S. Constitution.

The Appellate Division reversed, finding that the ordinance’s ban on digital billboards passes constitutional muster. In so ruling, the Appellate Division noted that the trial court failed to apply the proper standard for determining whether a sign restriction of this nature violates the First Amendment.

“The trial court’s interpretation imposed a burden on the Township that is not required for content-neutral restrictions on time, place and manner expression,” the panel held.

In reaching its decision, the appeals court relied on the Supreme Court’s decision in Ward v. Rock Against Racism, 491 U.S. 781 (1989) under which time, place or manner restrictions are valid, provided they satisfy three criteria: (1) they “are justified without reference to the content of the regulated speech,” (2) “they are narrowly tailored to serve a significant governmental interest,” and (3) “they leave open ample alternative channels for communication of the information.”

In this case, the Appellate Division found that the municipality satisfied the first prong of the Ward test because its prohibition of digital billboards was based on its interest in aesthetics and traffic safety, “without reference to the content of the regulated speech.”

The Appellate Division reasoned that “Even if the use of an electronic multi- message is considered a form of expression, the incidental effect of the Ordinance’s ban on announcements to be communicated in eight-second segments does not strip the Ordinance of its content neutrality”.

Under the second step of the analysis, the court noted that the appropriate standard requires only that “the means chosen does not ‘burden substantially more speech than is necessary to further’ the [municipality’s] content-neutral interest.” Accordingly, it found that the trial court erred in requiring that the ordinance’s restriction be “the least restrictive means of advancing its legitimate government interest.”

The Appellate Division further concluded that a complete ban of digital billboards could still be “narrowly tailored.” The opinion specifically cited the U.S. Supreme Court’s decision in City Council of Los Angeles v. Taxpayers for Vincent, in which the Court found that a total sign ban “did no more than eliminate the exact source of the evil it sought to remedy,” which was visual clutter.

With regard to the Franklin Township ordinance, the appellate court found that the ban on digital billboards was no broader than was necessary to eliminate the “heightened intrusive quality of digital billboards, affecting the aesthetics of the town and the residential area nearby, and a not unreasonable unease that the digital billboards would have a negative impact upon traffic safety.”

With regard to the third prong, the court minimized the argument that electronic multi-message billboards are advantageous because the message may be posted or changed quickly. As noted by the court, the lion’s share of the commercial speech to be projected on E&J Equities’ proposed billboard did not require this feature, and there are other means available for the town to broadcast emergency information.

As explained by the panel, “[B]ecause the audience who can receive communications through the proposed digital billboard is limited to motorists on a limited stretch of I-287, the alternative means are clearly superior in terms of their ability to reach the residents of the Township.”