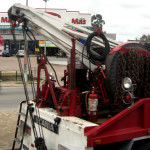 The Appellate Division of the Superior Court of New Jersey recently upheld an ordinance adopted by the City of Hoboken to license and regulate businesses that remove and store motor vehicles. The court held that city was well within its authority under N.J.S.A. 40:48–2.49, which outlines the aspects of towing that a municipality may regulate, including the fees charged for storage and removal and minimum standards of operator performance.

Prior to the enactment of this ordinance, Mile Square had a contract with Hoboken under which it acted as the exclusive provider of towing services requested by the City. According to the statute, Hoboken decided to move away from a single provider contract to address the prior system’s “lack of oversight, inefficiency in towing services, lack of necessary services during times of emergency and high volume, litigation expense, and lack of ability to recoup costs incurred by the City relating to the services” and to “increase effectiveness and efficiency of towing services within the City.”

Hoboken’s new system is based on a licensing scheme under which the City will only acquire towing services from licensees. Licensees are placed on Hoboken’s towing lists and are “summoned” by designated public officials, or their authorized agents, on a rotating basis. The ordinance details the licensing requirements and also includes provisions for schedule of allowable fees and procedures for enforcement.

As explained by the court, municipal ordinances are presumptively valid. Challengers to the validity of an ordinance have the burden of proving that it is arbitrary, capricious, or unreasonable.

In this case, the court concluded that the ordinance does not exceed Hoboken’s authorization to license and regulate towing services provided in N.J.S.A. 40:48–2.49, or impermissibly delegate authority to the director of Hoboken’s Department of Parking and Transportation to administer and enforce Chapter 184. The court rejected arguments that the ordinance violated the Predatory Towing Prevention Act and provisions of Local Public Contracts Law, finding both to be irrelevant.

The court also rejected Mile Square’s argument that Chapter 184 fails to provide adequate standards to guide the director’s exercise of discretion in granting or denying applications and enforcing the law’s provisions. According to the court, “There is no question that Chapter 184 provides adequate standards to guide the director’s discretion involving licensing and enforcement.” The court highlighted that the statute sets forth the standards for equipment, facilities and their distance from the city limits and the required motor vehicle drivers’ licenses operators must have.

However, it did agree with Mile Square that Chapter 184 impermissibly delegates authority to amend and supplement its provisions, which were adopted by ordinance, to the director of Hoboken’s Department of Parking and Transportation. As explained by the court, “amendment or reenactment of legislation required initially to be enacted by ordinance must be accomplished by the same means.”