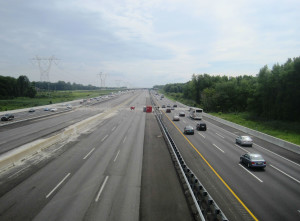 Joel Baudouin was driving on the Garden State Parkway (Parkway) with his mother, Marie A. Vernet, and two daughters in the car when an 80-foot hickory tree fell across the three southbound lanes of the Parkway and crushed the front passenger compartment of the vehicle. The tree was located approximately sixteen to nineteen feet from the guardrail, near milepost 151.5 of the Parkway, in the Township of Bloomfield.

Mr. Baudouin and Mrs. Vernet were pronounced dead at the scene.  The children, who were initially trapped inside the backseat area of the vehicle, suffered minor injuries. The mother of the children and the Estates of Joel Baudouin and Marie A. Vernet filed suit.  The plaintiffs alleged that the Turnpike Authority negligently failed to “properly maintain, remove, inspect, secure or otherwise properly care for the rotting, falling, dead and decaying trees adjacent to the roadway in the area of the accident.”  The Turnpike Authority is a public entity established in 2003 to operate, manage, and maintain the New Jersey Turnpike and Garden State Parkway.

The trial court dismissed plaintiffs’ claims as barred under the Tort Claims Act (TCA).  It specifically found that plaintiffs failed to produce legally competent evidence demonstrating that the Turnpike Authority had: (1) “actual or constructive notice” of the tree’s deteriorated condition, as defined under N.J.S.A. 59:4-3; and (2) “a sufficient time prior to the injury to have taken measures to protect against this dangerous condition” under N.J.S.A. 59:4-2(b).

The Appellate Division affirmed. “[P]laintiffs have not presented competent evidence showing the Turnpike Authority had actual or constructive notice of the tree’s seriously deteriorated condition,” the appeals court held.

As the court highlighted, the parties disagreed over the efficacy and competency of the Turnpike Authority’s hazardous tree inspection protocol.  As detailed in court documents, the Hazard Tree Inspection Program “consists of making periodic ‘windshield inspections’ of the trees that can impact the roadway.”  In this case, a Turnpike Authority employee inspected the trees while seated in the front passenger-seat of a car that drove at approximately ten to fifteen miles per hour, along the shoulder of the Parkway.  He and other inspectors would visually examine trees located near the highway that would potentially cause accidents, if the tree itself or their branches fell.  They did not detect any issues with the tree in question prior to the deadly accident.

In declining to impose liability on the Turnpike Authority, the panel relied on Polzo v. Essex, in which the Supreme Court of New Jersey held that it “did not have the authority or expertise to dictate to public entities the ideal form of road inspection program, particularly given the limited resources available to them.” The Appellate Division adopted a similar approach. “The windshield inspection protocol is a facially sensible approach to monitoring the parkway,” Judge Jose Fuentes wrote on behalf of the court. “Courts do not have the authority to require that the Turnpike Authority improve or refine its method of inspection.”

For more information about the court’s decision or the legal issues involved, we encourage you to contact Michael A. Jimenez, Esq., Counsel of Scarinci & Hollenbeck’s Government Law Group.