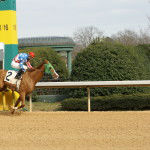 The Appellate Division has sided with New Jersey Gov. Chris Christie and his decision to veto the minutes of the state’s Racing Commission, which would have approved the distribution of $15 million to augment “purse monies” at New Jersey horse tracks. The veto was challenged by the Thoroughbred Breeders’ Association of New Jersey on a number of grounds.

The dispute in I/M/O New Jersey Racing Commission, App. Div. (Messano, P.J.A.D.) evolved from a 2011 bill creating the Atlantic City Tourism District and authorizing the New Jersey Racing Commission to allocate up to $15 million to the state’s horse racing industry through the augmentation of purses. The legislation further required that the funds be allocated at a regular Racing Commission meeting and reflected in the meeting minutes delivered to the Governor. It further stated that “if the Governor returns such copy of the minutes with veto of any action taken by the commission . . . at such meeting, such action shall be null and void and of no effect.”

The Racing Commission solicited recommendations from the industry and approved the disbursement of the $15 million, despite several groups opposing purse augmentation in light of ongoing negotiations to lease operations to private investors. The minutes were submitted to Gov. Christie and subsequently vetoed. Christie said that the Commission’s decision “contradict[ed] and jeopardize[d] [the] stated goal of creating a self-sustaining course for the horse racing industry.”  He also noted that “the manner in which the Commissioners distributed the . . . subsidies defie[d] reason and logic[,]” because funds were awarded to groups that did not request it. The Thoroughbred Breeders’ Association of New Jersey challenged the veto as both unconstitutional and arbitrary and capricious.

The Appellate Division ultimately rejected the various arguments made by the TBA. With regard to the argument that the Governor’s veto “circumvented the Legislature’s delegation” of power to the Commission to appropriate funds to the horseracing industry, the court found that “the express language of these statutes anticipates that the Commission could allocate monies intended to augment purses, but the Governor could nullify the action.”

With regard to the second argument, the appeals court noted that “independent research has not revealed” any cases in which “a court has applied the arbitrary, capricious, or unreasonable standard of review to the discretionary actions of a Governor.” As such, the court concluded that it was well within Gov. Christie’s authority to veto the minutes.