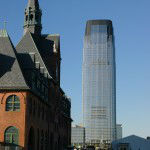 Two bills designed to make it easier for New Jersey residents to obtain public records and increase the openness of government meetings are moving through the Senate. Both pieces of legislation recently cleared the Senate State Government, Wagering, Tourism and Historic Preservation Committee and now move to the Senate Budget and Appropriations Committee.

The bills are sponsored by Senate Majority Leader Loretta Weinberg, D-Teaneck and seek to amend New Jersey’s Open Public Records Act (OPRA) and Open Public Meetings Act. In addition to creating greater transparency, the bills will also modernize the laws to account for changes in the way government agencies maintain public records and also how public officials communicate with each other and their constituents.

“These bills are not Republican or Democrat bills,” Weinberg said. “They are not liberal or conservative bills.”

“They are all about how the people who send us to the Legislature, to our local councils, to our county boards of freeholders, our county executive offices, have access to the information that they need in order to judge the work we do,” she said.

Sen. Barbara Buono (D-Middlesex), a co-sponsor of the OPRA amendment, agrees. As reported by the New Jersey Spotlight, her support for the legislation springs from her own frustration with the current process.

“I was blocked time and time again in the OPRA [Open Public Records Act] process,” said Buono, who had difficulty getting information from the New Jersey Department of Education about how the state missed out on a $400 million federal grant. “In the end I had to go to some very extensive lengths to get the information … It was a painful process of subpoenaing the fired education commissioner before the committee.”

Despite support from the New Jersey Press Association, the American Civil Liberties Union, the League of Women Voters and others, the future of the legislation is still largely uncertain. Although the committee approved the bills, they did not have Republican support and companion measures introduced in the Assembly have yet to be heard. In addition, similar bills seeking to improve public access to records have failed to pass in recent years.

Given the importance of these issues, we will be sure to keep you updated. We will also provide a detailed look at some of the proposed changes in our next post. So stay tuned.