In New Jersey Election Law Enforcement Commission v. DiVincenzo, the Appellate Division held that the Election Law Enforcement Commission (also known as “ELEC” or the “Commission”) still had jurisdiction to issue a complaint even though only two members voted due to vacancies.  According to the appeals court, the common-law quorum requirement applied to the issuance of the complaint because it was not a “determination” that required three votes of the Commission’s entire authorized membership of four. 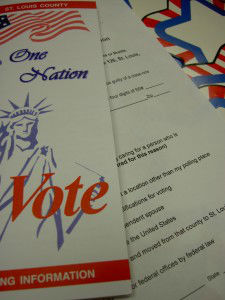 ELEC is an independent agency charged with the duty to enforce violations of the New Jersey Campaign Contributions and Expenditures Reporting Act (the Act). Pursuant to N.J.S.A. 19:44A-5, the Commission shall consist of four members appointed by the Governor to staggered terms and that “[n]o more than two members shall belong to the same political party.”

In July 2011, the Commission consisted of four members: Chairman Ronald J. DeFilipis, Vice Chairman Walter Timpone, Amos Saunders and Lawrence Weiss.  DeFilipis and Saunders were Republicans; Timpone and Weiss were Democrats. All four members of the Commission voted to conduct a formal investigation into alleged violations of the Act by Joseph DiVincenzo, a Democratic candidate, and his campaign treasurer, Jorge Martinez.

The Commission authorized the issuance of a complaint against respondents in January 2013.  At that time, the vacancy created by Weiss’s death in November 2011 had not been filled.  In addition, because Timpone had recused himself, no Democrat participated in the authorization. Therefore, the two remaining members who voted to authorize the complaint were both Republicans.

Martinez and DiVincenzo challenged ELEC’s jurisdiction to authorize the complaints, arguing that a valid authorization required a bipartisan agreement to file a complaint and “the requisite number of Commissioners.”  The Administrative Law Judge agreed, concluding ELEC required three Commission members from two parties to have the necessary quorum to act, and, therefore, lacked jurisdiction to issue the complaint.  During the 45-day period for the Commission to act on the ALJ’s ruling, only one commissioner was active.  As a result, the ALJ’s decision was deemed adopted.

The Commission later appealed.  In response, the defendants argued that ELEC lacked standing to appeal its own agency decision, and that the appeal presented a non-justiciable political question.  Meanwhile, the Commission maintained that because the ALJ decided a purely legal issue not falling within the ALJ’s statutory role, and because a clearly erroneous decision was deemed adopted due to the Commission’s inability to act, appellate review should be available.

The appeals court first concluded that ELEC had standing to bring the appeal.  “The Commission is given broad authority under N.J.S.A. 19:44A-6 to enforce the Act and is a party to the action that is the subject of this appeal,” the panel explained.  “The deemed-adopted decision effectively curtailed the Commission’s discharge of its statutory responsibilities.  We are satisfied that, under the circumstances here, ELEC’s appeal is not barred on the ground that it is not an aggrieved party.”

The appeals court then turned to the merits of the case, concluding that ELEC had the authority to issue the complaint.  In reaching its decision, the court acknowledged that the Campaign Contributions and Expenditures Reporting Act deviates from common law quorum by expressly requiring three votes of the Commission’s entire authorized membership of four. However, it went on to conclude that the Legislature did not intend the Commission’s authorization of a complaint to be a “determination” under the statute. As the panel explained:

Based upon our review of the plain language of the Act, the definitions used by the Legislature in the APA and the application of established principles of statutory construction, we conclude that “determination” applies to the Commission’s final resolution of a case and decisions regarding the penalty to be imposed, not to the decision to authorize a complaint.  As a result, the common law quorum requirement applied and the authorization of the complaint was valid.

For more information about the court’s decision in New Jersey Election Law Enforcement Commission v. DiVincenzo or the legal issues involved, we encourage you to contact Michael A. Jimenez, Esq., a member of Scarinci Hollenbeck’s Government Law Group.