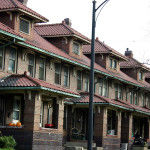 The Appellate Division of the New Jersey Superior Court recently upheld the decision of the Union City Board of Adjustment to grant a conditional use variance to bring a multi-family apartment containing illegal garden apartments up to modern code. The case, Larry Price v. 636 7th Street, L.L.C. and Union City Board of Adjustment, highlights the requirements for obtaining such a variance under New Jersey’s Municipal Land Use Law (MLUL).

Defendant 636 37th Street, L.L.C. owns a two and one-half story structure, which was built in 1913 as a four-family dwelling. Sometime later, an additional two apartments were illegally constructed in the basement, and the property has been utilized and taxed as a six-unit apartment for over thirty years. It is located in the R-Zone in Union City, which permits one- through four-unit family dwellings and also allows garden apartments as a conditional use. Union City’s zoning ordinance defines a garden apartment as “[a] residential structure of not more than three stories containing three or more dwelling units.”

Defendant 636 37th Street, L.L.C. filed an application with the Union City Board of Adjustment seeking variances and Board approval to upgrade the two basement apartments to bring them in compliance with the housing code and the zoning ordinance. The Board subsequently granted the conditional use variances after concluding that the applicant satisfied both the positive and negative criteria. Plaintiff Larry Price filed suit, arguing that the property required a use variance, since, in his positions, the use was not permitted. He also claimed that the Board’s decision was arbitrary, capricious, and unreasonable because the applicant had not satisfied the positive and negative criteria requirements for a use variance.

The Appellate Division disagreed with the plaintiff’s assertions, concluding that the Board had properly granted the conditional use variance.

In this case, the court concluded that the applicant’s two and one-half story, six-unit building meets the basic features of a garden apartment, although it did not satisfy all of the criteria. “The fact that the property does not meet many of the ordinance’s peripheral specifications for a garden apartment simply highlights the need for a conditional use variance,” the court noted.

With regard to the appropriateness of the conditional use variance, the court rejected the plaintiff’s argument that the applicant failed to satisfy the special reasons requirement. As explained by the Court, where the desired use is not inherently beneficial to the public good, the applicant must show “special reasons” why the variance should be granted, such as health and safety, the prevention of sprawl, and the creation of a desirable visual environment.

Here, the court concluded that the applicant satisfied all of the relevant requirements for obtaining a conditional use ordinance. “The building contained substandard, illegally constructed units that had been built many years ago. The proposed modifications would further the purposes of zoning, by creating desirable, safe, aesthetically improved apartments in a prime location near mass transport,” the court held. Accordingly, the Board’s decision to grant the conditional use variance was proper.