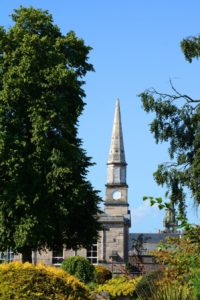 The Trinity Lutheran Church Child Learning Center (Center) operates a pre-school and daycare center on church property. In 2012, the Center sought to replace the pea gravel on its playground with a pour-in-place rubber surface by participating in Missouri’s Scrap Tire Program. The program, run by the State’s Department of Natural Resources (Department), provides grants to qualifying nonprofit organizations that install playground surfaces made from recycled tires.

Trinity Lutheran subsequently filed a federal lawsuit, alleging that the Department’s failure to approve its application violated the Free Exercise Clause of the First Amendment. The District Court dismissed the suit. It reasoned that the Free Exercise Clause prohibits the government from outlawing or restricting the exercise of a religious practice, but it generally does “not prohibit withholding an affirmative benefit on account of religion.”

A divided panel of the Eighth Circuit affirmed. According to the appeals court, the fact that the State could award a scrap tire grant to Trinity Lutheran without running afoul of the Establishment Clause did not mean that the Free Exercise Clause compelled the State to “disregard the broader antiestablishment principle reflected in its own Constitution.”

By a vote of 7-2, a majority of the Supreme Court disagreed. It held that the Department’s policy violated the rights of Trinity Lutheran under the Free Exercise Clause of the First Amendment by denying “a qualified religious entity a public benefit solely because of its religious character.”

“The consequence is, in all likelihood, a few extra scraped knees,” Chief Justice John G. Roberts Jr. wrote. “But the exclusion of Trinity Lutheran from a public benefit for which it is otherwise qualified, solely because it is a church, is odious to our Constitution all the same, and cannot stand.”

In reaching its decision, the majority noted that the Free Exercise Clause protects against “indirect coercion or penalties on the free exercise of religion, not just outright prohibitions.” Accordingly, the majority rejected the Department’s argument that simply declining to provide Trinity Lutheran a subsidy, that the State had no obligation to provide, “does not meaningfully burden the Church’s free exercise rights.”  As the Chief Justice explained:

“Trinity Lutheran is not claiming any entitlement to a subsidy. It instead asserts a right to participate in a government benefit program without having to disavow its religious character…. The express discrimination against religious exercise here is not the denial of a grant, but rather the refusal to allow the Church—solely because it is a church—to compete with secular organizations for a grant.”

Because the Supreme Court’s decision in Trinity Lutheran may impact state and local grant programs, we encourage public entities to review the ruling and contact our experienced counsel with any questions or concerns.

For more information about the court’s decision in Trinity Lutheran or the legal issues involved, we encourage you to contact a member of Scarinci Hollenbeck’s Government Law Group.