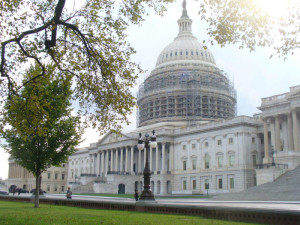 Like other states, Texas draws its legislative districts on the basis of total population. A group of Texas voters filed suit, alleging that the method of districting violated the “one person, one vote” principle because it produces unequal districts when measured by voter-eligible population. Accordingly, they contended that voter-eligible population — not total population — must be used to ensure that their votes will not be devalued in relation to citizens’ votes in other districts.

By a vote of 8-0, the Supreme Court declined to adopt voter-eligible apportionment as constitutional command. Justice Ruth Bader Ginsburg authored the Court’s opinion, with Justices Samuel A. Alito, Jr. and Clarence Thomas both filing concurring opinions.

“As constitutional history, precedent, and practice demonstrate, a State or locality may draw its legislative districts based on total population,” Justice Ginsburg wrote.

In reaching its decision, the Court noted that both Constitutional history and existing precedent comport with the conclusion that States and localities may comply with the one-person, one-vote principle by designing districts with equal total populations. It also noted that using total population is a widely used practice.

“Adopting voter-eligible apportionment as constitutional command would upset a well-functioning approach to districting that all 50 States and countless local jurisdictions have long followed. … Nonvoters have an important stake in many policy debates and in receiving constituent services,” Justice Ginsburg wrote. “By ensuring that each representative is subject to requests and suggestions from the same number of constituents, total-population apportionment promotes equitable and effective representation.”

The practical result is that states are not required to draw up legislative districts by using the voting population to be assigned to each one. While the Court held that states have the authority to base their state legislative districts on a division of the total population, it did not go so far as to find that states are constitutionally required to use it as a starting point. It appears that issue will be decided another day.

For more information about the decision or the legal issues involved, we encourage you to contact a member of Scarinci Hollenbeck’s Government Law Group.

You can also find additional information about the case on our Constitutional Law Reporter.