In Patricia Delvecchio v. Township of Bridgewater, the Supreme Court of New Jersey held that an aggrieved public employee could rely on the testimony of a treating physician, who has not been designated as an expert witness, to establish the existence of a disability for a claim under the New Jersey Law Against Discrimination (LAD). 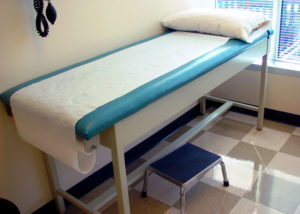 Plaintiff Patricia A. Delvecchio was employed by the Township of Bridgewater (Township) as a dispatcher for the Police Department (Department). At that time, the Township maintained three shifts for police dispatchers, including a midnight shift, and required dispatchers to work each of the shifts on a rotating basis. In 2003, plaintiff developed inflammatory bowel syndrome (IBS), and began treatment with Dr. Gary Ciambotti (Ciambotti), a gastroenterologist. Ciambotti wrote to plaintiff’s supervisors and stated that her symptoms would be exacerbated by an assignment to the midnight shift. While the Township initially provided her with a steady afternoon shift, it later stated that it could not guarantee that she could entirely avoid midnight shifts.

In September 2006, plaintiff began treatment with Dr. Joseph Rochford (Rochford), a psychiatrist, who diagnosed her with anxiety and panic attacks. He also provided a note to the Township stating that midnight shift assignments would exacerbate the plaintiff’s stress condition. On December 24, 2007, plaintiff declined her supervisor’s request that she work a midnight shift, and another dispatcher was required to remain on duty to cover the shift. The Township asked plaintiff to resign, citing the burden imposed on other employees who covered the remaining shifts. The plaintiff refused, and accepted another position with the Township as a records clerk, but at a lower salary. On September 16, 2009, the Township terminated plaintiff’s employment for neglect of duty and chronic/excessive absenteeism.

The plaintiff subsequently filed a complaint for disability discrimination and retaliation under the LAD. In response to defendants’ discovery requests, plaintiff stated that she had not retained any expert witnesses, but identified Ciambotti and Rochford as treating physicians who were expected to testify. At trial, the court did not permit Ciambotti to provide testimony regarding his diagnosis and treatment for plaintiff since he had not prepared an expert report. The court also limited Rochford’s testimony by precluding any opinion regarding plaintiff’s diagnosis. The jury ultimately ruled in favor of the Township.

The New Jersey Supreme Court held that the testimony of a treating physician is admissible to support a plaintiff’s disability claim under the LAD, “provided that the proponent gives notice of the testimony to the adverse party, responds to discovery requests in accordance with the Rules of Court, and the testimony satisfies N.J.R.E. 701 and other applicable Rules of Evidence.”

In this case, because the plaintiff provided the information that defendants requested in discovery regarding the proposed treating physician witnesses, the court concluded that “the trial court should have permitted her to present the vital testimony of these witnesses.”

As explained by the court:

Treating physicians have been consistently permitted to offer medical testimony regarding the diagnosis and treatment of their patients. When treating physicians are called to offer such testimony, they are not testifying as expert witnesses, but, instead, are offering factual evidence and opinion evidence governed by N.J.R.E. 701. The Rule allows a court to admit testimony of a lay witness in the form of opinions or inferences provided that the testimony is rationally based on the perception of the witness, and will assist in understanding the witness’s testimony or in determining a fact in issue.