In 1969, the Borough of Red Bank passed a resolution authorizing NJNG “to lay, maintain and operate its conductors, mains, and pipes, together with the appurtenances thereto, in all the public streets, alleys, squares and public places” in the municipality, provided the pavement and other surfaces were restored to their pre-construction condition. In 1991, RiverCenter was established to revitalize Red Bank’s downtown business district. The centerpiece of the project was a $1,800,000 streetscape project, which included brick sidewalks, decorative streetlights, and benches. 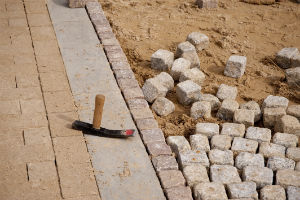 In March 2011, NJNG obtained a construction permit to open the street and sidewalk in RiverCenter’s special improvement district. It subsequently removed a gas regulator from an underground pit in the street and installed a new regulator, which protruded approximately 15 inches from the front of the building, through the sidewalk pavers, and into the sidewalk.

Thereafter, NJNG sought to replace all of its underground regulators due to alleged corrosion problems that compromised safety. Red Bank objected to the plan and ultimately passed a resolution that opposed the relocation project on safety grounds. NJNG nonetheless submitted multiple applications to open streets and sidewalks in Red Bank. In denying the requests, Red Bank cited its “Planning and Development Regulations,” which require the issuance of a development permit prior to the “erection, construction, alteration, repair, remodeling, conversion, removal or destruction of any building or structure.”

Upon denial of its applications, NJNG filed a complaint in lieu of prerogative writs, which argued that, pursuant to N.J.S.A. 48:9-17, it had sole discretion to determine how it would distribute natural gas service within the borough. The statute authorizes gas companies to “lay conductors and install related facilities for conducting gas through the streets, alleys, squares and public places in any municipality or municipalities in which [those companies] may lawfully operate.” The trial court sided with NJNG, concluding that, but for “reasonable regulations with respect to the opening of the streets, alleys, squares and public places,” Red Bank could not “dictate the manner in which [gas] service [was] provided.”

The Appellate Division reversed, finding that the trial judge’s expansive reading of N.J.S.A. 48:9-17 ignored other provisions of the statute and the Municipal Land Use Law (MLUL) that clearly provide the municipality with more power than simply regulating the opening and closing of streets and public places.

“Both historically and presently, applicable provisions of the MLUL make clear that the Legislature never denied municipalities the ability to exercise at least some of their traditional zoning powers simply because a public utility was involved,” the panel stated. The court further noted that the MLUL’s successor statute, N.J.S.A. 40:55D-19, “actually increased control over a public utility’s use of land within a municipality’s borders.”

The court also rejected NJNG’s argument that Red Bank’s development regulations should not apply because its proposed installation requires municipal action that is “purely ministerial.” As highlighted by the court, the intended installation involved more than what was routinely regulated by a permit to open a street or sidewalk. In addition, NJNG’s installation of above-ground regulators through public sidewalks went well beyond the power granted by the 1969 franchise resolution, noting “the sidewalks would, in fact, never be returned to their prior condition and stanchions holding utility regulators would now be protruding through the sidewalk and for some fifteen inches from the front of buildings.”

The appeals court declined to address how Red Bank’s development regulations should be construed, and whether NJNG, therefore, is required to submit a development permit. Rather, it stated that NJNG could file an appeal with the board of adjustment and thereafter to the court or the Board of Public Utilities.